We had a good time out tonight,Eva feels much better so they collect quite a lot of goodies. I talked to Linda tonight,the children are at Milke and rachels
Posted by Pregont Family at 8:37 PM 1 comment:

We are here in Liberia!!!

Poor Angel looked like a wounded dog most of the trip. She was pretty motion sick the entire time in the air. Angel had more fun at the metal detector area in Brussels. She forgot to take her ear rings, belt and watch off, so the alarms went off. She played so innocent I had to laugh. Apparently it is a new rule that when you set the detector off they also search your bags. Well our little traveler had more than the allowed zip lock bags. Fortunately this lady liked Angel and let her go.

We met two dads from Cleveland who are each bringing home 4 kids!!!! Yes, there are people with more kids than us. I believe this makes 10 kids for each of the dads. I had to separate Angel from these two guys so she wouldn't get any ideas about more kids :-)

Monrovia's airport was chaos as normal. Again I had 5 men trying to carry my luggage to the car.

Angel is in bed and now I'm going to join her, it is 9:30pm Wed night here. We are tired, but I think a good night's rest and we will hit the town tomorrow. We called our agency today and they said no embassy visit tomorrow, but on Friday to process the visa. Let's see if this really happens. I so want to believe this will happen. We will go and see Nia tomorrow or Friday, not sure if we can wait til Friday to see her. The bad part is that the orphanage is about 1.5 hours away.

I'm missing Eva especially right now because I'm at the house where I first met her. Where I spent 10 days getting to know my little girl.
Posted by Pregont Family at 4:17 PM 3 comments:

An Hour From Take Off!!!

We are sitting waiting for our flight to leave Chicago. We are excited and Angel is trying not to think about being claustrophobic for the long flight.

My lovely bride made things fun during check-in. She decided to ask the check-in lady if her carry on luggage "is my carry on too big?" Mind you, we knew this piece of luggage was too big to begin with but thought we would try to get it through.

So, the lady goes over to the tiny tiny luggage template and says it is too large.

No ladies, I didn't show self-control and promptly said "why did you ask that, we knew it was too large!!" They were going to charge us $110 to check that bag. Fortunately my lovely bride packed a smaller suite case inside a larger one (why she did this I have no idea). We quickly re-arranged our luggage and off we went to the metal detectors.

There we both lost our drinks. Come on- H2O will never explode anything. Angel hasn't flown as much since the travel regulations got strict and was very put out to lose her water, forcing her to pay $2 at the aiport for another.
Posted by Pregont Family at 3:09 PM 2 comments:

hello yall
don't know if you will get this before you leave but wanted your to know we are thinking of you and praying for a safe ,easy travel.
love to you
Cara
Posted by Pregont Family at 9:26 PM 1 comment:

Many of you have asked if Nia speaks English. Well, kinda :-) Read the information below from an American who lived in Liberia:

Liberia is classified as an “Anglophone” country. Despite its 15 active tribal languages, the official language of the country is English. This makes it easier for us to work here, obviously because we did not have to learn a completely new language upon arrival. I said it makes it easier, but understanding the Liberian version of English is not always easy, and even after two years sometimes it is impossible. Being the amateur linguist that I am, I’ve been able figure out what is behind this difficulty in understanding my native tongue when uttered by many Liberians. It is not simply a matter of accent. First, and most obvious to the listener, is in the way Liberians pronounce many words—the end of many words are left off. “House” becomes “haw”, “dog” becomes “daw”, “serious” becomes “seria”, and so on. Sometimes even each syllable in multi syllable words are deleted, so “redlight” might become “re’li’”, “everything” is “e’ry’tin’, or ” kool aid” is “koo aye.” To complicate matters significantly, Liberians use different English words than most North Americans choose. For example, “reaching” means “leaving” as in “I’m reaching to my hou’,” “finish” means “to be out of something,” As in “the rice is finish,” or “flog” instead of “beat,” as in “My brother tol’ me he wou’ flog me.” Finally, Liberians finish many words randomly in “O,” as in “fini-o” for “finish,” or “daw-o” to give “dog” a little more panache.

Therefore when you combine words pronounced differently with word choices that are different than what you’ve lived with all your life, you get sentences that are just a little beyond reach until you understand both the usage of the word and the pronunciation of all the words in the sentence. So, putting these factors together, we might have the following sentences—see if you can figure them out:
1. “Trokon carry mah own sef pla’ toe to hi’ hou’.’” (Literally, “Trokon carry my own self play toy to his house,” or “Trokon took my toy to his house.”)
2. “Dea’ ca’ be sweeo.” (Literally,” Deer can be sweet-o,” or “Venison is delicious.” )
3. Leh ca’ta’ eh sleepi’ bah da’ pi’ hou’ (Literally, “the carter it sleeping by the pig house” or “The carter (a clothe pad used to cushion the head when carry things) was left out all night near the pig pen.”)
4. “De ro’ he wah a bri’ one and dryo.” (Literally, “The rogue he was a bright one and dry-o,” or “The thief was light-skinned and very thin.”)
5. “Leh pum’ eh spoi’. Le’ carry de jeep to tow’ fo’ new pah.’” (Literally, “The pump is spoiled, let’s carry the jeep to town for new part,” or “The pump is not working, so let’s take the 4wd vehicle into town for a new part.”)
6. “Boieh! Boieh! Boieh!” (Literally, “Boiled egg, boiled egg, boiled egg!” which children shout as they carry hard boiled eggs for sale on the street.)
7. “Unca Bah, I juke mah foo-o. Plea’ pu’ plasti’ on mah cuh.” (Literally, “Uncle Bob, I juke my foot. Please put plastic on my cut,” or “Uncle Bob, something jabbed or poked into my foot. Please put a band aid on my cut.”)
8. “Eneh, i’ yaw wais’ wateh on ma’ trouseh, I weh sureleh blow yaw mouf.” (Literally, “Enoch, if you waste water on my trousers, I will surely blow your mouth, “ or “Enoch, if you dump or spill that water on my pants, I will certainly punch you in the mouth.”)
9. Deh worsha’ weh fi’fi’. We gettin’ yaw puh-lenti!” (Literally, “The worshop was fine, fine. We getting you plenty,” Or “The workshop was very good. We understood you very well.”)
10. “Whi’ ma’, plea’ buy suh’ re’ oi’ fruh me. One hundreh LD.” (Literally, White Man, please buy some red oil from me. One hundred LD.” Red oil is palm nut oil; LD is Liberian Dollars—in this case about $1.80 US. )
11. “Sis Renita, I cuh’ to spe’ to yaw.” (Literally, Sis Renita, I come to speak to you,” or “Sister, Renita, I dropped by just to say hi.”)

Not everybody speaks like this, but these phrases reflect a large portion of the people with whom we live and work each day. Some people, such as government or business leaders speak very similar English to me, with only what I call the attractive “African accent” distinguishing us. Others speak a version of English so different in cadence, inflection, pronunciation, syntax and vocabulary as to require interpretation. Most children are harder to understand than adults. In our neighborhood, English is a second language to Bassa for many, and a significant minority speak virtually no English. So getting to understanding each other always takes a little extra time, even for simple things. Bu’, we ah tryin’, sma’ sma’, wid dis talkin’ ting he’. An’ soo’, we wi’sureleh be gettin’ e’rybodeh puh-lenty clea’, an den’ we ha’ a googoo ti’ togeddeh.
Posted by Pregont Family at 5:23 PM 2 comments:

Going to Get Nia 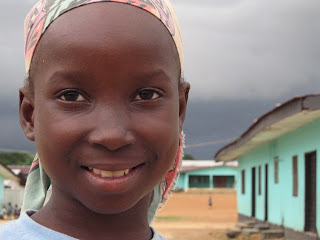 I'm sure by now no one in the world is looking at this blog. It has been over a year since I've posted. We will begin to use this Blog to update everyone on our trip to Liberia. We are going to Liberia Oct 30th!!!!! We getting our daughter that we have been fighting to get for over a year and a half. This is our Nia (her name means Purpose).
Posted by Pregont Family at 1:53 PM 5 comments:

Pregont Family
We are a family with 3 biological boys and 3 adopted girls. We homeschool, drive a big white 15-passenger van, don't have cable because we'd never speak to each other if we did, love coffee, love books, and try to live in God's grace as much as possible, cause we sure do need it.

Matt & Angel's Current Reading List: (Not counting the Read Alouds that I do for homeschool)