Nia was weighed at the pediatrician last December 2007. Since then, she has gained 22 pounds and grown 6 inches. I double checked the numbers. Staggering, huh? Good nutrition and a loving family, not to mention getting rid of pesky parasites, can cause a young girl to gain 22 pounds in one year. And growing 6 inches?? I have plants that don't grow like that even when they're eating Miracle Grow.
Posted by Pregont Family at 4:22 PM No comments:

Welcome Back from ImprovEverywhere on Vimeo.

Funny, funny, funny. Everytime I come arrive at the Nashville airport I can't help but think of when we brought the girls home from China/Liberia. The love we felt from our friends and family who were at the airport, screaming/crying/yelling/cheering....was overwhelming. We are loved well by our friends.

Posted by Pregont Family at 9:22 PM No comments: 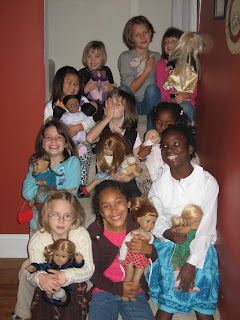 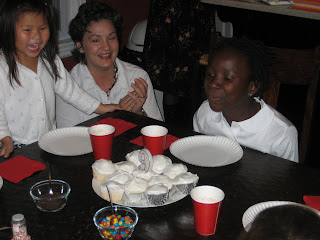 On the menu was triangle-shaped PBJ, cream-cheese sandwiches, and Fairy Fudge. We let the girls decorate their white cupcakes with M&Ms and sprinkles. The frosting was a big hit.
Next time I think I'll just frost some styrofoam balls and skip the cake.

It's Been A Year

A year ago, Matt and I were flying home from Liberia, West Africa, with our newest daughter, Nia. Looking back, the courage that it took her to leave with this white couple on an airplane must have tied her insides in knots. She didn't talk much then. Just nods or shakes. I remember when the plane took off from balmy Monrovia her knuckles were white from griping the arm rests. Same thing when she rode an escalator for the first time in Brussels.

I remember waking up on the plane to see her changing clothes (fully) at her seat beside me. No worries or concerns about anyone looking. I also remember her flushing a toilet and jumping back to make sure it didn't take her down, too. And the mounds of red pepper she would put on her food would make a grown man cry.

It's been a long, hard year for both Nia and our family. We've all had adjustments to make. Her tantrums are less frequent and don't last as long. After 9 months she finally started saying she loves me when I tuck her in. She says she's sorry and asks for forgiveness now. She's much more kind to her siblings and doesn't treat them like servants or enemies. For me, I've realized the depth of my anger is scary. I've learned to call on God daily, sometimes hourly, for help in raising this child He has entrusted to us. I've learned to get control of my anger more, to reach out and hug a child when everything in me wants to turn around and walk away because of her behavior.

Last winter Clive wanted to send Nia back because she really wasn't any fun, and was actually pretty mean to her siblings. Now he loves her and enjoys his time playing with her. In fact, they're pretty tight.

We're all still in process. It's still a long road ahead. But we're marking our first year with feelings of victory and progress.

The other day at Costo Nia was filling up our cups with water, you know the water button that's part of the lemonade button on those soda dispensers. Like when you get to do your own refill. Anyways, after she finished filling the cups, she promptly washed her hands under that same running water, right there next to the Sprite and Coke. Then shook the water off right there in the drain. The people behind us were speechless. I just prayed for her to say something loud in her accent so they'd have grace.

Some things haven't changed that much. :- )
Posted by Pregont Family at 8:18 AM 4 comments:

Pregont Family
We are a family with 3 biological boys and 3 adopted girls. We homeschool, drive a big white 15-passenger van, don't have cable because we'd never speak to each other if we did, love coffee, love books, and try to live in God's grace as much as possible, cause we sure do need it.

Matt & Angel's Current Reading List: (Not counting the Read Alouds that I do for homeschool)